Warning: The magic method Hugeit_Maps::__wakeup() must have public visibility in /homepages/15/d396589540/htdocs/4050/wp-content/plugins/google-maps/googlemap.php on line 84
 Mark - Loyal and True Masonic Lodge No 4050 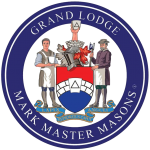 The United Grand Lodge actively encourages Master Masons to complete the Third degree by seeking exaltation in a Royal Arch Chapter; its makes no suggestion that they should complete that of a Fellow Craft, by advancement as a Mark Master Mason. However one would hope that all Master Masons would want to do so, as it is simply an accident of history that those masons in England and Wales who are exalted in the Royal Arch have not previously taken the Mark Degree.

While there is evidence that a form of Mark Degree was in existence in Scotland as early as 1599, according to the earliest known English records Mark Masonry was introduced in a speculative body at Portsmouth on the 1st September 1769, when that ubiquitous Thomas Dunkerley conferred the Mark Degree on brethren of the Royal Arch Chapter of Friendship No 257. Records do not show where he got the Degree from, but all researchers into Freemasonry know of the man and his place in the history of Freemasonry.The Mark Degree was subsequently worked in many Lodges and even under the authority of the Old Grand Lodge of York, but the effect of the union in 1813 between the Ancient and Moderns was the specific recognition of the three Craft degrees including the Holy Royal Arch, thus completely excluding the Mark Degree. This led for many years to the active discouragement of the Mark Degree, nevertheless many Lodges continued to work the Degree and whilst the original circumstances would appear to have been detrimental to masonry, they were eventually to cause several leading Mark Masons to form their own Grand Mark Lodge in June 1856 with Lord Leigh as the first Grand Master.

Just prior to this at one of the Grand Lodge quarterly communications in that year, a resolution was carried to include the Mark Degree within the True and Ancient masonry, however at the next meeting the minutes detailing that resolution were not agreed as an accurate record and the resolution fell… Masonic in fighting.. politics.. jealousy., who knows. Happily by 1860 a Concordat establishing a common ceremonial, was entered into by the English Grand Mark Lodge and the Grand Chapter of Scotland and slowly the Mark Degree grew in popularity.

The Mark Degree is now one of the most successfully supported degrees in Freemasonry. There are nearly 1500 Mark Lodges in the English Constitution, with Kent being one of the largest Provinces, outside of London. Together with the Royal Ark Mariner Degree, the Province of Kent has 104 Lodges with some 3500 members. Details of these Lodges, showing where and when they meet, are included in the Red Kent Year Book, available from the Kent Mark Provincial Secretary.

The organisation of a Mark Lodge is very similar to that of a Craft Lodge with some important changes. Four additional Officers are employed, three progressive, these are the Master, Senior and Junior Overseers, these are placed in the centre of the Lodge and the other officer, the Registrar of Marks, non progressive, sits adjacent to the Secretary, each has an important part to play in the Ceremony. The ceremony of admission is called Advancement and chronologically in the Solomonic legend it follows that of a fellow craft. It is one of the oldest and most interesting grades of freemasonry and today incorporates two degrees, for the candidate is first acknowledged as a Mark Man then subsequently advanced as a Mark Master Mason in the same ceremony. You will be pleased to learn that only one fee is required.

It appears that the Degree grew out of an ancient ceremony in which each craftsman selected for himself a private mark. There is evidence of this throughout the ages, cathedrals and other prominent buildings worldwide, carry the marks of the masons who built them and these can still be seen on the masonry to this day.

There is evidence a form of Mark Degree was extant in Scotland as early as 1599. The effect of the Union in 1813 between the Ancients and Moderns in England was of course the specific recognition of the three Craft degrees only, including the Holy Royal Arch, thus completely excluding the Mark Degree. Nevertheless many Lodges continued to work the degree, particularly in Kent, and eventually in 1856 Grand Mark Lodge was formed.  with which he might designate his particular work and this mark was duly registered with the constituted authority.  The symbol of the degree is a keystone, on which is engraved certain mystic letters, the meaning of which is revealed during the ceremony

At the building of King Solomon‘s Temple and before the institution of the degree of Master Mason and Past Master, there were 80,000 operatives employed, part of whom were hewers in the quarries at Zaradatha and part builders of the temple, besides these, was a levy of 30,000 in the forest of Lebanon. In order that each of the 111,000 workmen might be known to his superior officers, every portion of the work was subjected to the closest scrutiny and each fellowcraft received with punctuality the reward of his industry and skill, this immense number were divided into 1100 Lodges of fellowcrafts and entered apprentices, the latter under the direction of the former, who taught them the work, and over the whole presided 3,300 Menatschim, Overseers, or Mark Master, three over each Lodge. These are now called The Worshipful Master, the Senior and Junior Wardens. Each Fellowcraft had a mark peculiar to himself by which is work was known and by which he was able to receive payment for his labours.

The legend of the degree is most instructive and, is well founded on statements of Holy Writ, relating to a period in the building of the Temple prior to the death of Hiram Abif. It teaches the lesson that education is the reward of labour and contains a dramatic message. . The Mark Degree assists old and young brethren alike to gain experience in Freemasonry, and thus make their mark, without first having been installed in the Craft Chair.

The Mark Degree is open to all Master Masons. The Order is generally perceived to be more informal than the Craft and there is no doubt that among Mark Master Masons you will ever find friends. The ceremony of admission is called “advancement” and chronologically the degree follows that of Fellow Craft. Membership of the Mark Degree is a necessary requirement for those wishing to progress further in the mysteries of Freemasonry by seeking membership in the Ancient and Honourable Fraternity of Royal Ark Mariners, the Royal and Select Masters, the Order of the Allied Degree and the Worshipful Society of Free masons, Rough masons, Wallers, Slaters, Paviors, Plaisterers and Bricklayers more usually known as The Operatives.

Regalia consists of a white apron having a triangular flap, all bordered with ribbon of light blue with crimson edges. The ribbons bears three rosettes of similar colour. Masters and Past Masters have the rosettes replaced by silver levels.
The breast jewel is a  keystone of simulated ivory having a silver lewis which is suspended from a one-inch silver bar by a ribbon in the same colours as the apron. Each face of the keystone bears certain characters, on the reverse in English and on the Obverse in Hebrew.
Officers wear a collar four inches in width in light blue and crimson. Their badge of office is suspended there from superimposed on a keystone.

The Mark Fund of Benevolence makes large donations to other Masonic Charities and good causes. Whilst the local Kent Mark Benevolent Fund is able to provide extremely rapid relief to needy Kent Mark Master Masons, and their dependants, as well as supporting the main local Craft Charities.

There is no doubt that a vast number of brethren who have attained eminence in the Craft have been no less eminent in the Mark. Any Master Mason who is interested and would like further information on this ancient and honourable degree, but nevertheless friendly degree, is likely to find that a Mark Lodge is held at his Masonic Hall and information will be available there. Alternatively contact the Mark Provincial Grand Secretary for Kent.