Warning: The magic method Hugeit_Maps::__wakeup() must have public visibility in /homepages/15/d396589540/htdocs/4050/wp-content/plugins/google-maps/googlemap.php on line 84
 Allied Masonic Degrees - Loyal and True Masonic Lodge No 4050 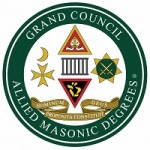 Prior to the establishment of the Allied Masonic Degrees, Most of the “additional” degrees worked in England in the early part of the nineteenth century originally came under the aegis of warrants granted by the “Antients”, who held that Craft Warrants entitled Lodges to work any Masonic degree of which they had knowledge and members who could work it.

By the end of the century a large number of unrelated Degrees of no direct interest to any Grand Body was still being worked in different parts of the country. In the late 1870’s it was agreed by the then Grand Secretaries of the Craft, Mark, and Ancient and Accepted Rite to establish a ‘Grand Council of the Allied Masonic Degrees in England and Wales and the Colonies and Dependencies of the British Crown’. The headquarters would be at Mark Masons’ Hall.

The Order of the Allied Masonic Degrees  – A Brief History

After the formation of the United Grand Lodge, various groups of degrees were gradually organised into separate Orders. Each of these had their own governing bodies. But during the last quarter of the 1800’s a large number of unrelated Degrees of no real interest to any Grand Body were still being worked in different parts of the country.

In the late 1870’s and according to oral tradition, it was decided to form a “Grand Council of the Allied Masonic Degrees in England and Wales and the Colonies and Dependencies of the British Crown”.This Grand Council would give some sort of cohesion to a few of the “additional degrees” and ensure working with standard rituals.

The “Orders” of the Grand High Priest, St Laurence the Martyr (note Laurence and not, as nowadays, Lawrence), the Red Cross of Babylon and Knights of Constantinople, Almost immediately, acknowledged the supremacy of Grand Council, which recognised some Councils as “Time Immemorial” and began, in 1880, to grant warrants to others.

In 1892 a similar Grand Council, called the Sovereign College of Allied Masonic Degrees for the United States of America was formed. One of the degrees coming under this Grand Council was the Grand Tilers of King Solomon.

By special arrangement with the Sovereign College, the Degree of Grand Tilers of Solomon was conferred on the Grand Master and other members of the Grand Council in 1893 and added to the original four authorised to be worked in Councils under Grand Council. It would appear that King Solomon became plain Solomon in the transfer.

In 1895 the then Grand Master authorised Councils to work the (American) single Degree of Secret Monitor, despite a Grand Council for that Order being in existence since 1897. Peace was declared in 1931 when the Grand Council of the Allied Masonic Degrees agreed to cease practicing the Degree of Secret Monitor. This means that Warrants granted before 1893 authorised Councils to work four degrees, those granted from 1895 to 1924 six degrees and, as no warrants were issued between 1924 and 1934, later warrants authorise five.

The Five Degrees of the Order of the Allied Masonic Degrees

Since 1931 the Order of Masonic Allied Degrees, has been responsible for the following Five Degrees :-

1. Degree of St. Lawrence the Martyr. This Degree teaches the value of fortitude and humility in the face of adversity as demonstrated by the martyrdom of St. Lawrence. It is the first to be taken by candidates admitted to the Order, the others may be taken in any sequence.

2. Degree of Knight of Constantinople. Relates to the reign of the Emperor Constantine the Great and teaches the virtues of humility and equality.

3. Degree of Grand Tilers of Solomon or Masons Elect of Twenty-seven. Bears some similarity with the Cryptic Degree of Select Master but with interesting variations. It warns of the dangers of carelessness and hasty judgment and the importance of proper tiling.

4. The Red Cross of Babylon. Is of considerable antiquity and is profoundly mystical. It is generally associated with the Holy Royal Arch. It emphasises the importance of Fidelity, Integrity and Truth.

5. The Holy Order of the Grand High Priest. This is also of considerable antiquity and has been closely associated with the Holy Royal Arch. The ceremony is dramatic and is of a profound and spiritual nature.

Regalia requirements are fairly minimal comprising the tie of the Order and either a composite breast jewel with representations of each of the five degrees or a bar with five miniature jewels. If brethren subsequently achieve District or Grand Rank regalia an appropriate collar is worn.
Candidates for the Order must be both Mark Master Masons and Royal Arch Companions.
The equivalent of a Lodge is called a Council. There are four Councils in the Masonic Province of East Kent, The nearest for members of Loyal and True is the Invicta Council No 54, at the Franklin Rd. Gillingham Centre.

Meetings are held on the third Monday in February, second Monday in June, and the fourth Monday in October.