Warning: The magic method Hugeit_Maps::__wakeup() must have public visibility in /homepages/15/d396589540/htdocs/4050/wp-content/plugins/google-maps/googlemap.php on line 84
 Other Orders - Loyal and True Masonic Lodge No 4050

Orders and Degrees beyond the Craft 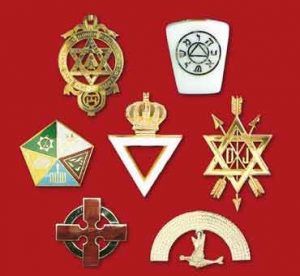 Beyond Craft and Royal Arch Masonry there are many Orders and Degrees of Freemasonry. Membership of which is restricted, at the least, to Master Masons. These Orders and Degrees are autonomous and quite independent, although most of them are in amity with, and recognised by, The United Grand Lodge of England. The following should hopefully give an explanation of those Orders and Degrees.Most Masons are initiated, passed and raised in the three Craft Degrees, many hold office in their Lodge and go through the chair without ever wanting to pursue Freemasonry further. Some are exalted into the Royal Arch, but that is it. Many though, desire further Masonic knowledge, but don’t know where to find it. Much is spoken of ‘Side Masonics’ or ‘Higher Orders’, but it can be hard to know which ones to consider. For most, money is a factor, and in some areas it can be hard even to find out about these Degrees. Furthermore, many Masons actually believe that you should not go beyond the Craft and the Royal Arch at all, stating that nothing can be higher. Well, one certainly should not talk of ‘higher’ Degrees, but rather of ‘other’ or ‘additional’ Degrees or Orders. The Craft and Royal Arch do reveal what we call the ‘secrets’ of Masonry, but these various other Degrees also teach these secrets, but in a series of different ways and with a variety of contrasting approaches.

That is their importance: different entry-points to Masonic philosophy. There are about 110 to choose from, with a further fifteen additional sets of ‘secrets’ conferred on being admitted to the chair of some of them! These other Degrees began to appear in England in the 1750s, way after pure ‘Antient Masonry’ (Craft and Royal Arch) was established here; they were, by and large, the product of enthusiastic masons, particularly in France, keen to extend their Masonic ideas and experiences. Literally thousands of Degrees were invented and many of them practised for a while. Only those Degrees thought to be worthwhile have survived and these are flourishing today.

Two points have to be understood from the outset. Firstly: the fact that Grand Lodge has no jurisdiction over these additional Degrees, the majority of them being administered from Mark Masons’ Hall, next to St James’s Palace, and from 10 Duke Street St James, nearby, does not in any way preclude a member of the Craft and Royal Arch from joining them, nor does it mean that they are higher than those ‘Pure and Antient Degrees’. To be admitted to any of them, the minimum qualification is to be a Master Mason (some additional Degrees demand more than this) and, therefore, anyone who is a member of a Craft lodge under the United Grand Lodge or one of its recognised foreign Grand Lodges, is eligible to receive them. Secondly: It must be stated what these additional Degrees are not. Whilst there are many parallels and connections between them, and whilst some of them fit together rather well, these additional Degrees are not part of a large, progressive system with, for instance, the Entered Apprentice at the bottom and the Sovereign Grand Inspector General 33º or Holy Royal Arch Knight Templar Priest at the top! In some countries, such as the USA, this is often erroneously considered to be the case, but this placing of one above the other – save in individual, self-contained systems such as the Ancient and Accepted Rite – is pure invention. The Degree numbers may be high, the titles may be long and grand, but it is what each Degree teaches you that is important, not its number!

While these additional Degrees certainly don’t form any sort of cohesive system, most can be taken in any order. These Degrees are mainly grouped together in twelve main orders with four others rather obscure, although seen by many as fascinating for all that. Of these 12 sets of Degrees or orders, five demand that their members are Trinitarian Christians and are in some ways identifiable as Masonic orders of chivalry, whilst four others are based around stories from the time of the Old Testament, as are three of the five Degrees of the eclectic Allied Masonic Degrees. Of these Old Testament Degrees, many are concerned, as you would expect, with the Temple in Jerusalem and with events in and around it. The Operatives or ‘The Worshipful Society of Free Masons, Rough Masons, Walkers, Slaters, Paviours, Plaisterers and Bricklayers’ – to give it its full title – is concerned with considering, as its name suggests, the operative roots and practises from which Freemasonry may have sprung, whilst the Societas Rosicruciana in Anglia, Soc Ros or the SRIA as it is variously known, is not a Masonic body as such, but considers itself a society of Christian Freemasons with interests in philosophy, science and theosophy.

Of these twelve Masonic bodies, as many as seven have, for a variety of unconnected reasons, come to be administered by Mark Masons’ Hall with the Grand Secretary of the Mark Degree responsible for the administrative side of all seven. Of the others, the 33 Degrees of the Ancient and Accepted Rite are governed by the Supreme Council 33º from its so-called Grand East at 10 Duke Street St James, also in the heart of London, whilst the Royal Order of Scotland is run from Edinburgh. The Operatives and the SRIA are relatively small Degrees run independently from London, whilst the Grand Council of Holy Royal Arch Knight Templar Priests is administered from Newcastle. In addition to the secrets of their chairs, some orders consist of only one Degree each, some 2,3,4,5,7, or 9, whilst the Knight Templar Priests (or Order of Holy Wisdom) have 32, but only the last is conferred; the Supreme Council 33º of the Ancient and Accepted Rite has 33, but only confers five: the 18th, 30th, 31st, 32nd and 33rd! Confused? Well, who wouldn’t be? To try to make this a little clearer and suggest what a mason might get from some of these orders, it is possible to group some of these Degrees together, and to suggest some possible approaches which one might take. However, through various accidents of history, they are independent of each other and make no references implicit or explicit about each other, but many in fact share similar threads. The additional Degrees seem to be of three types, beyond miscellaneous Degrees which are very different. Of what can be termed the miscellaneous, the seven Degrees of the Operatives are a relatively recent invention, the order being founded in 1913 with the aim of perpetuating the sort of ceremonies supposedly practised by operative Masons.

None of the orders have Degrees anything like them. The Degree of Royal Ark Mariner, not to be confused with the Holy Royal Arch, is a single Degree dating from at least the 18th century (although it may be much earlier) concerning the mercy and providence of God after the Great Flood, and it has no connection with the Mark Mason’s Degree, despite being administered by the same body. Two of the five Allied Masonic Degrees (which have nothing in common save that they were ‘allied’ together for administrative purposes in 1879) can be termed genuine ‘side Degrees’, in that they were probably first unofficially conferred on individual masons taken aside by other brethren, often after a ceremony of a completely unrelated Degree. These two are the Degree of St Lawrence the Martyr and the Degree of Knight of Constantinople (not to be confused with the Order of the Red Cross of Constantine). All the other Degrees can be considered to be of three basic types: the Solomonic Degrees, the Degrees of Knighthood and the Degrees of Priesthood.

The Degrees of Priesthood

The Degrees of Knighthood (not necessarily Christian)